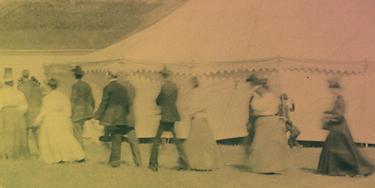 The most concise overview of Nazarene origins and development is the “Historical Statement” published in the Manual of the Church of the Nazarene. More helpful information is found in “Turning Points in Nazarene History,” an outline of Nazarene development that is designed for pastors and Christian educators to use in 60 or 90-minute presentations to new church members or in similar contexts. A brief handout is also provided that can be printed and distributed in classes.

Have you wondered what early Nazarene periodicals looked like? Then click The Nazarene Messenger to view the issue of The Nazarene Messenger published in Los Angeles for the week of November 19, 1908. This issue was published just one month after the Second General Assembly was held at Pilot Point, Texas, uniting the three regional parent bodies of the Church of the Nazarene into a single Wesleyan-holiness denomination.

Timothy L. Smith, the “dean of Nazarene church history,” launched a new era in historical understanding with his two classic works: Revivalism and Social Reform in America (1957) and Called Unto Holiness (1962). The latter was the most scholarly work in Nazarene history published up to that time.   Smith was one of the leading evangelical scholars of the twentieth century and made his mark in various areas, including the study of immigrants, race, and religion, and various dimensions of the Wesleyan movement.  You can review bibliography of his publications here, read some of his works that remain online here,  and read a brief article on his career here.