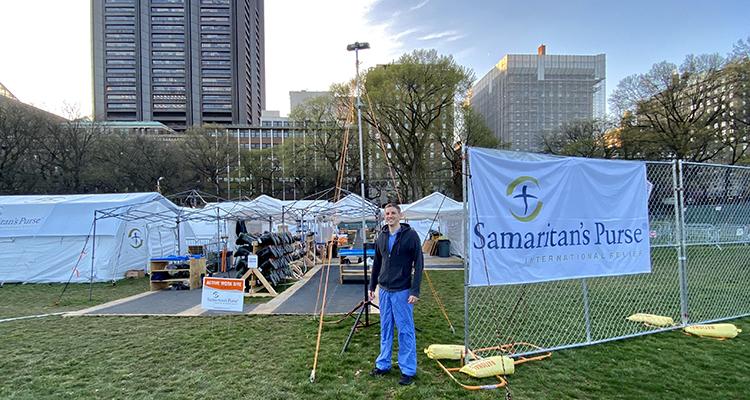 Matt Woodley, a missionary doctor serving at Kudjip Nazarene Hospital in Papua New Guinea, was on home assignment at the beginning of the COVID-19 pandemic. Through a past connection with Samaritans’ Purse, he was able to work at a field hospital in New York City’s Central Park.

During the New York outbreak, hospitals became overwhelmed and reached out to organizations like Samaritan’s Purse for help. In response, Samaritan’s Purse contacted medical personnel to assist in one of its field hospitals. Woodley prayed about it, and after discussing the opportunity with Nazarene Missions leaders, he found both encouragement and support. Woodley was soon working 12-hour night shifts for three weeks straight.

Woodley said the hospital contained five wards, including a “step down unit” and an intensive care unit (ICU). Due to Woodley’s ER experience, he mainly worked with those in the higher severity units. Most of his patients were on ventilators and in grave condition.

Woodley said one of the hardest parts for patients was the separation from their families.

“Having COVID-19 in New York at that time was like leprosy,” Woodley said. “It was like, if you started coughing and sneezing everywhere, everyone’s going to run away from you. These people were just so isolated. They couldn't be with their family.”

Because the field hospital was set up by a Christian organization with a Christian team, Woodley and his fellow staff members were able to pray with almost all of their patients. One patient specifically came to mind for Woodley.

“[There was] a man in his 40s, and he was Middle Eastern,” Woodley said. “His family was Muslim, but every day we had the chance to pray with him and his family. He got to the point where he was almost off the ventilator, so we could actually communicate with him. It was just really powerful to be able to talk and pray with him.”

Woodley credited the community and the collective faith of his team to help them give the best care possible.

“I just haven’t been on a team like that in America, where everyone is a Christian and everyone is interested in bringing not only the healthcare but bringing the Gospel to people’s lives,” Woodley said. “That made the presence of Jesus so palpable in those tents, knowing that God was working through everybody.”

Woodley and his family were finished with their speaking engagements when Samaritan’s Purse requested his help.

“We were supposed to go on vacation, and then all of the travel bans struck and we couldn’t get back [to PNG],” he said. “I have been very privileged to be a part of what God is doing around the world, whether that is in Papua New Guinea at Kudjip Nazarene Hospital or in New York City at the Samaritan’s Purse tents in Central Park.”

Woodley and his family are looking forward to returning to PNG soon.