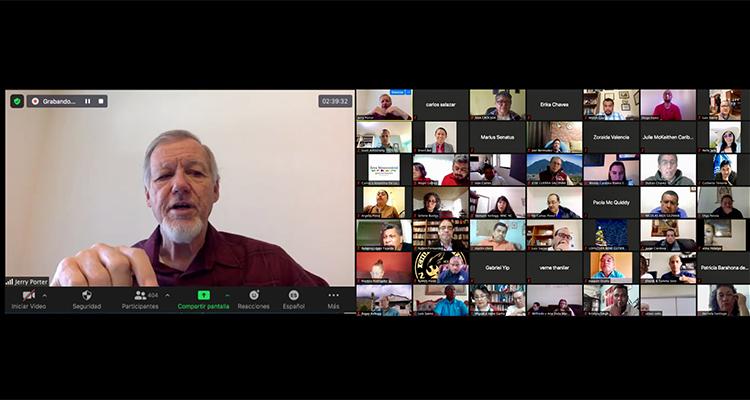 The Mesoamerica Region began the Mentoreo de Impacto (Impact Mentoring) project during the month of January with more than 400 leaders from across the region joining the first session led by General Superintendent Emeritus Jerry Porter.

The regional project aims to develop leaders of regional ministries, districts, and churches and local ministries so that they can intentionally act as counselors and mentors for new generations, integrating those with pastoral calling and leadership in formal theological education programs.

"The Church of the Nazarene is blessed to have experienced leaders who have worked for a long time and are leaving a fruitful ministry, but it is also necessary to think about the legacy for new generations," said Milton Gay, the project coordinator.

The project consists of three phases or levels of training. The first phase, which began in January, includes training for regional, field, and district leaders so they can use the tools they received to train pastors and local leaders in phase two. In the third phase, the pastors and district presidents will train the local church.

The program encourages each leader to find a mentor to accompany him or her in a personal way, and in turn that trained leader looks for people to mentor.

"The challenge is to learn to walk alongside someone and accompany them, providing experience and knowledge to the new generations," Gay said. “Each missionary will minister with that philosophy. Each pastor must go to each local church to look for young people with a call to develop them as pastors and leaders. The leaders of the ministries also have the purpose of accompanying and mentoring.”

The first phase consists of three units. The first unit deals with the general elements of mentoring and accompaniment while the second unit deals with mentoring strategies and self-knowledge as key points to carry out such work successfully. The third unit considers resources, techniques, compliance processes, and plans in the leadership area.

"Mentoring is accompaniment,” Gay said. “It is the investment of life in others, and it is investment of time in the new disciples."