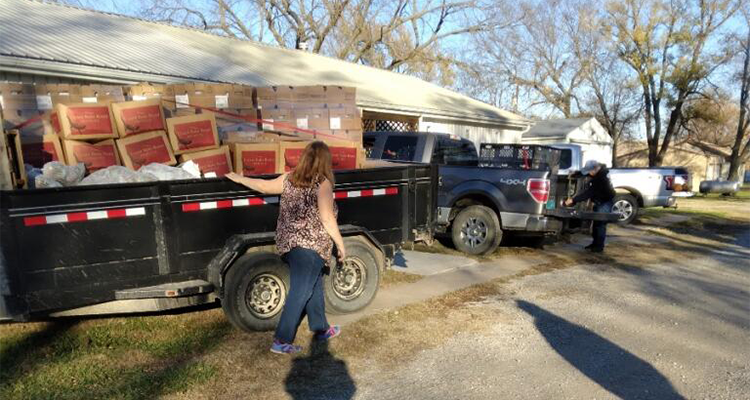 Harvest House Food Pantry, a ministry of the Severy Church of the Nazarene in Severy, Kansas, gave away nearly 500 pounds of turkey on 18 November to nearly 200 families in the community. Harvest House feeds more people on a monthly basis than the Kansas Food Bank, the state’s largest food distribution social service.

The mother daughter-team was initially hesitant, and church leaders asked a few other people to take on the role, but nobody accepted.

”Finally, I said I would take the job until they found someone who could do it…and I’m still here,” Newman said.

The pantry conducts monthly distributions that reach up to 200 groups in a four-hour window. As Thanksgiving approached, Newman didn’t anticipate receiving any turkeys, but she created a survey that asked what items recipients needed for Thanksgiving and if they would be interested in turkeys if they were available. Two weeks ago, the Kansas Food Bank called and said they had 180 extra turkeys, which happened to be nearly the same number of people who had selected turkey on the survey.

“That’s just the way it seems to happen all of the time,” Newman said.

Severy Church of the Nazarene averages about 25 people in attendance, and the town of Severy is only 300 people. Yet they feed people from 17 different counties and 23 different cities on their distribution days. In 2020, the food pantry distributed $1.2 million worth of food to those communities.

Lead Pastor Terry Love explained the pantry’s humble origins in the church basement in 2014. Some church members had heard that there were some elderly community members who didn’t have sufficient resources to meet their food needs. So they took donations, and with about $100, they filled up the basement with as many staple items they could find and started holding monthly distribution days. As the ministry outgrew the basement, the church built a fellowship hall that has become home to Harvest House.

The story of the food pantry is an example of how God provides. A few months ago, Pastor Love had promised a local group 300 hamburger buns. But the pantry had run out, and as the promised pickup day drew closer, Newman started to worry.

“I thought, ‘Oh Lord, where am I going to get them?’” Newman said. “Whole Foods [called and] gave us a donation, which was a three-quarter semi load of food. On that truck was tons of hamburger buns, and here we are.”

The pantry was born out of a simple response to a need that the church could meet. And it’s grown with God’s help because the church continues to respond to the need.