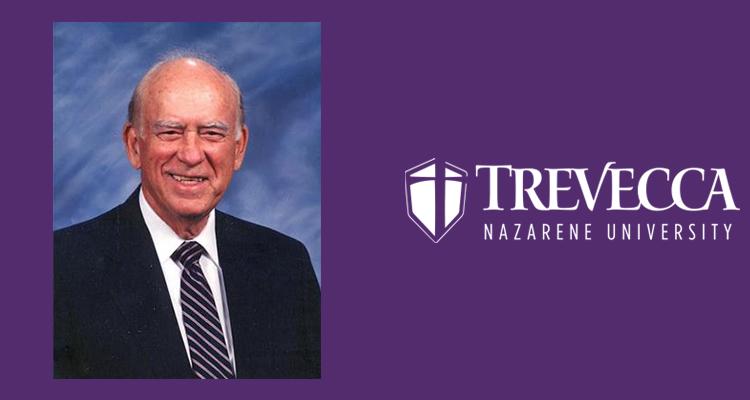 Born 2 July 1921 in Covington County, Alabama, Adams lived a life of service — to the Lord, to the Church of the Nazarene of which he was a member, and to Trevecca Nazarene University. Adams’ legacy and heritage are steeped in Trevecca’s history. A member of his family has attended Trevecca in every decade since 1913, when his parents sold their farm in Alabama and came to study with Trevecca’s founder, J.O. McClurkan.

Adams himself began attending Trevecca High School in 1939, then attended Trevecca College from 1940 to 1943. He entered the U.S. Navy, married the love of his life, Beatrice Brake, in 1944, and returned to Trevecca College to graduate in the class of 1947. His senior picture in the school’s yearbook, the Darda, described him as a “gentleman of the finest quality” who sang second tenor in the college quartet, read much, was quick-witted, and possessed “a smile that was always accompanied by his unthinkable vocabulary.”

Adams studied at Peabody College until 1953, eventually earning a master’s and a doctoral degree in history, the intellectual passion of his life. He was the first Trevecca graduate to earn a Doctor of Philosophy. During his time at Peabody, he served as principal at Trevecca High School and taught social studies there. He was named to the Trevecca College faculty as a professor of history in 1954 and quickly assumed duties as dean of the faculty, serving in that role for a decade.

Adams taught history at Trevecca from 1964 to 1966. In 1967, he was appointed dean of DeKalb College in Atlanta. During his tenure at DeKalb, the school’s enrollment grew from 4,500 to 11,000 students. He was also a member of the Trevecca Board of Trustees throughout that 12-year period.

When Adams served as Trevecca’s ninth president from 1979 to 1991, achievement and advancement were hallmarks of his administration. Upon assuming the office, he secured the school’s future and reputation with the Southern Accreditation Association by leading a “Wipe Out the Debt” campaign to pay off a million dollars in short-term debts.

The educational reputation of Trevecca was strengthened, and new buildings brought new life to the campus. Master’s programs in education and religion were established. The management and human relations degree completion program was launched, an innovative option in its time that allowed non-traditional students to return to college to finish their bachelor’s degrees.

The Jernigan Student Center was constructed, as were the Tartar Student Activity Center and the Martin Building. Adams also renovated the Marks Guest House for Trevecca’s visitors and completed a major restoration of the McClurkan Building, which housed the Religion Department, the bookstore, the mailroom, and the college chapel. Upon Adams’ retirement as Trevecca’s president, the school named one of its three original buildings the “Homer J. Adams Administration Building” in honor of his achievements and 30 years of service to the school as professor, dean, and president.

Adams is survived by his wife of 76 years, Beatrice Brake Adams, and their children, Homer James Adams, Jr. and Sarah Adams Johnson and their families. The family will receive friends at the Mount Olivet Funeral Home, 1101 Lebanon Road, Nashville, on Saturday May 29, from 4-6 p.m. A visitation will be held at Trevecca Community Church of the Nazarene, 335 Murfreesboro Road, Nashville, on Sunday, May 30, from 12:30-2 p.m. A memorial service for Dr. Adams will follow, beginning at 2 p.m.

This is an abridged version of an obituary published by Trevecca Nazarene University. To read the full obituary, click here.