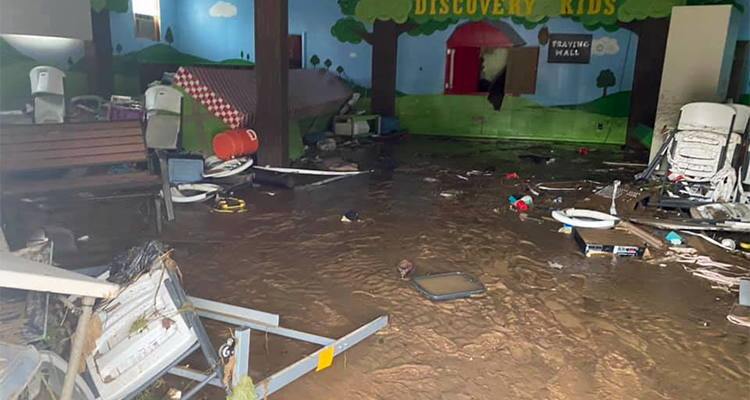 Record-breaking rainfall sent floodwaters surging through low-lying areas of Middle Tennessee on 21 August. Waverly, Tennessee, was one of the hardest-hit areas, receiving 17 inches of rain in just 24 hours. The rainfall led to deadly flash flooding that took the lives of at least 22 people with 50 people still unaccounted for.

“We’ve been trying to clean up what we can,” said Daron Brown, lead pastor of Waverly Church of the Nazarene. “We’ve lost everything. At least 10 families in our church have lost their homes, and our community looks like a bomb hit it. But it’s times like this is when we see the worst and the best: the worst in terms of disaster and the best in terms of people and God’s presence and grace showing up in the middle of such horrendous tragedy.”

The church is located right next to Trace Creek. When Brown learned the creek was starting to rise again, he headed to the church along with other staff and church members to move items from the building to higher ground and set up a barrier. But the water rose quickly, endangering those in the building. Part of the team was able to leave, but Brown and five others ended up stuck in the church.

“We made the decision not to go get in our cars because the water was rising, climbing up the tires,” Brown said. “We stayed up in the sanctuary’s upper-level and looked out the front door, and we watched our cars float away.”

The group of six, which included Brown’s two sons, another pastor, and two laypeople, shared snacks available in the sanctuary as they waited in the church for three hours.

“Because of how we were affected, we have not been able to be in full mission mode toward others because we’ve had to respond ourselves to what’s going on,” Brown said. “It just runs against our grain [as a church] to have to take care of ourselves.”

Camp Garner Creek is a Nazarene campground just 30 minutes from Waverly. Six camp buildings were destroyed: the dining hall, the maintenance director’s house, the main office, the RV park, half of a lodge, and the snack shack. The RV park was completely flooded, and two residents were swept away and eventually stranded in nearby trees until they could be rescued by boat.

Due to the COVID-19 pandemic, the camp staff has had limited capacity to host groups at Camp Garner Creek for the last two years, but the flood damage has decreased that capacity even further. The staff are in search of a mobile kitchen so they can continue hosting groups in the buildings that remain.

“We really want to get past this as soon as we can,” said Camp Director Finley Knowles. “As soon as we can get a mobile kitchen, we have the capacity to serve groups up to 200.”

In addition to the local efforts, a pastor from Northeast Indiana, Mark Roberts, was asked by his city's Emergency Manager to go down there in a pastoral role and bring water and flood remediation supplies to aid the efforts. Nazarene Compassionate Ministries is sending disaster response teams to help the recovery efforts as well. They are in the process of setting up Camp Garner Creek as a Work and Witness project so teams can go and assist them in some of their onsite projects that now loom in front of them.

To stay updated on the recovery efforts and learn how you can help, follow Waverly Church of the Nazarene and Camp Garner Creek.