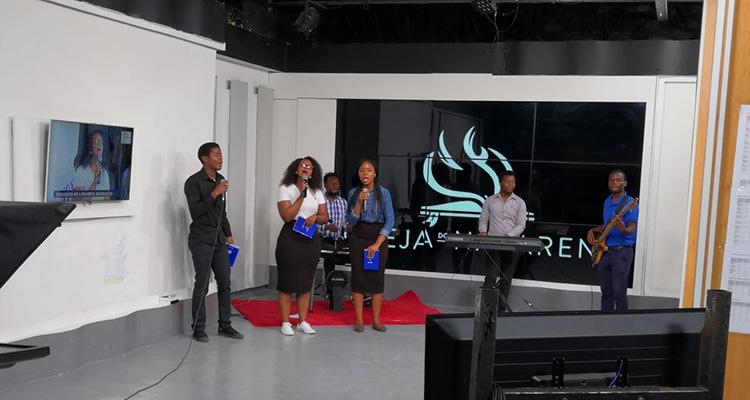 The Church of the Nazarene in Mozambique, like in most places, has had to get creative to reach its members amid the COVID-19 pandemic. Since 29 March 2020, the Nazarene church has been allowed to broadcast a service on national TV and radio on Sunday mornings and Wednesday nights.

“The Nazarenes in Mozambique are very excited and optimistic to keep the TV and radio program, ever after the crisis is gone,” said Admirado Chaguala, the missions coordinator for Mozambique. “For most of them, it’s a revival happening at the moment of crisis.”

The TV services are being led by a rotation of pastors and district superintendents from the three districts that surround the capital city of Maputo.

Fili Chambo, chair of the Board of General Superintendents and a Mozambique native, said the TV and radio services became part of the contingency plan for the church in Mozambique once it became apparent the government was going to issue a State of Emergency Declaration due to COVID-19.

“Included in this is the ability to record the service and share on Facebook, Whatsapp, etc.,” Chambo said.

According to Chaguala, the church has been able to reach more than 15,000 people who are accessing the Facebook page for the devotionals and recorded services.

Thanks to some of the newfound media access, multiple pastors have been given local radio time as well.

“In the Chibuto area, the district superintendent was asked to share the word of God and message to encourage the people in this time of crisis,” Chagauala said. “Rev. Novele went even beyond by sharing prevention measures on the radio. As a result of the great work that he did, the community radio station asked him to share on a weekly basis.”

The church will broadcast a Holy Friday and Easter Sunday service on both TV and radio. The Easter service will include a time for Communion as they encourage everyone in their homes to partake.

--Church of the Nazarene Africa