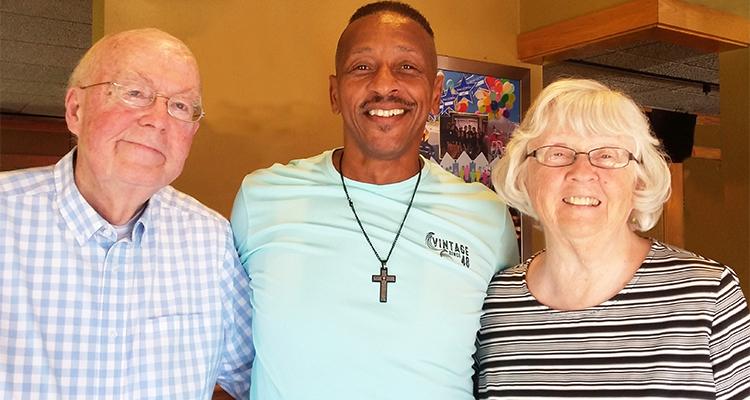 Mikey Blakely (center), with Chuck and Doris Gailey in September 2021.

What began as a small seed in an impoverished area of Boston, Massachusetts, has blossomed into a story of God’s faithfulness and grace almost 65 years later.

In 1953 when Eastern Nazarene College student Beth Goodnow Merki attended a missions service in the most impoverished and dangerous area of Boston, she felt moved to enlist her fellow ENC students to provide services for the children. The students caught a vision to start Boston Chapel, a church on Dover Street, known as Boston’s “skid row.”

The project originated through the ENC student evangelism society, which started a simple Sunday school class for the children. The average attendance was 40 in the first year, and at end of the school year, the students held a picnic that was attended by 72 people from the neighborhood. According to The Spirit Makes the Difference, the students funded the entire operation themselves. Boston Chapel became the first Nazarene church in the city of Boston, which at the time was the only major U.S. city without an established Nazarene church.

Many of the students who worked at Boston Chapel during their time at ENC eventually went on to serve as missionaries and ministers. One young girl who attended, Jossie Owens, eventually became superintendent of the New England District.

While they were ENC students, retired Nazarene missionaries Chuck and Doris Gailey regularly picked up neighborhood children for the church in their station wagon, sometimes squeezing in as many as 22 kids. The Gaileys felt especially drawn to the Blakely family. Edward and Earlean had 12 children and were working hard to move off Dover Street.

Chuck and Doris often gave them a much-needed break by taking the six youngest kids on fun trips to Wollaston Beach. Even after the Blakelys moved, Chuck and Doris would still go to pick up the kids for Sunday school. Four years later, the Gaileys were heading to Africa as missionaries and lost touch with the Blakely family.

A few months ago, Chuck and Doris’ son Rob found a Michael Blakely through LinkedIn. Rob emailed him explaining his attempt to find the Blakelys on behalf of his parents.

“What are your parent's names? If their names are Chuck & Doris, I do remember them.”

Mikey called Chuck and Doris the next day, and they spoke for the first time in almost 63 years.

“Our family has always remembered you,” Mikey explained. “We have talked about you through the years, and we were just talking about you a few days before Rob contacted me! You left an indelible imprint on our lives.”

Shortly after, Chuck and Doris were blessed to receive a beautiful arrangement of flowers and a bouquet of fruit from Mikey. His card read, in part: “For the fruits of your labor. With love, gratitude, and remembrance of how you blessed me and my family. To God be the Glory! Love, Mikey.”

Chuck and Doris were thrilled to discover that Mikey is serving the Lord by serving others. Mikey is ministering in the Boston neighborhood of Jamaica Plain, where he strives to bring health and wholeness to families and the community through the Edward and Earlean Blakely Creative Arts Center. Mikey’s theme for his ministry is “To God be the Glory.”

Recently, Chuck and Doris traveled to Massachusetts to catch up with Mikey, who shared that all of his siblings are Christians. Their parents now have more than 260 descendants, many of whom are serving the Lord.

“Chuck and Doris Gailey left such an enduring impression and impact on my life that I have never forgotten,” Mikey said. “They were wonderful instruments who took the time to love our family, and they brought God to our table. For more than 65 years, our family has been extremely grateful for the missionary work they had with our family in Boston, and now hearing what they have done globally as missionaries in Africa — and then training missionaries through the seminary — just totally glorifies the Lord and brings it all full circle.”