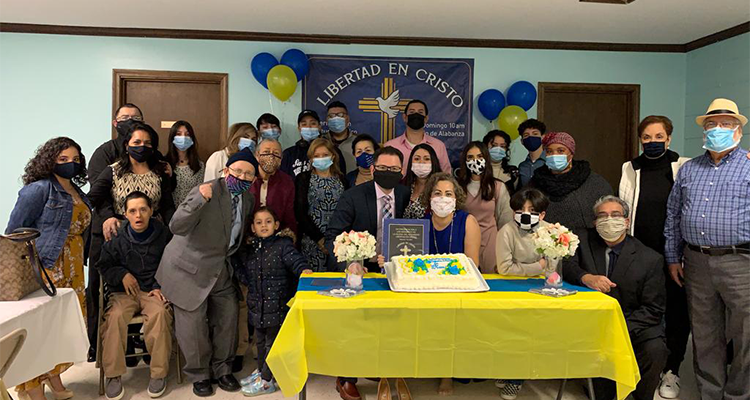 The MidSouth District officially organized seven new Hispanic congregations in the months of January and February 2021. It was a triumphant conclusion to several long years of ministry led by pastors who were committed to expanding the Kingdom of God.

“All glory to God for this very special time in the life of a new church,” said Eduardo Lelli, Hispanic ministries coordinator for the MidSouth District. “For some, it was long years and for others it was four or five short years, but they all reached their goal. This work represents years of consecration in which we experienced struggles, trials, tears, and joys and have emerged victorious. We congratulate these brave shepherds.”

The following churches were the officially organized:

The organization services were filled with joy and excitement. There was presentation of the founding members, members added by faith or association, and the official board members, who were prayed over by the church members. Where appropriate, the pastor of the mother church was present and received a commemorative plaque.

When Lelli took over as Hispanic ministries coordinator for the MidSouth District, District Superintendent Dwight Gunter wanted to focus on officially organizing these seven Hispanic Nazarene congregations. Some reached their goal earlier than others, like Bethel Hermitage Church of the Nazarene, which was planted by Lelli’s former children’s pastor, Ramón Hernandez.

“We thought we would reach the status of an organized church at the five-year mark, but I guess we got there one year before,” Hernandez said. “As a pastor, I have many things to learn, but I am thankful that I have Pastor Lelli by my side to mentor me with all the knowledge he has in the Hispanic ministries.”

Iglesia del Nazareno Palabra de Vida was on the verge of closure when Lelli began trying to get it officially organized. The previous pastor had left after the Tennessee and Mississippi districts merged into the MidSouth District. Lelli pulled together the remainder of those who wanted to be involved, and Karla Sanchez became the leader and eventual pastor.

“It’s been challenging, but the Lord has helped us,” Sanchez said. “I see that this is my call even though I didn’t feel secure at times. When a church is left without a pastor, there’s a risk for the work to stop. Because of God’s mercy, He’s helped us to get this far.”

One of their goals at Palabra de Vida is to continue the planting process.

“We want to plant more churches, we want to see people coming to Christ,” Sanchez said. “We have many goals, but the Lord is the only one that can help us to stay focused.”