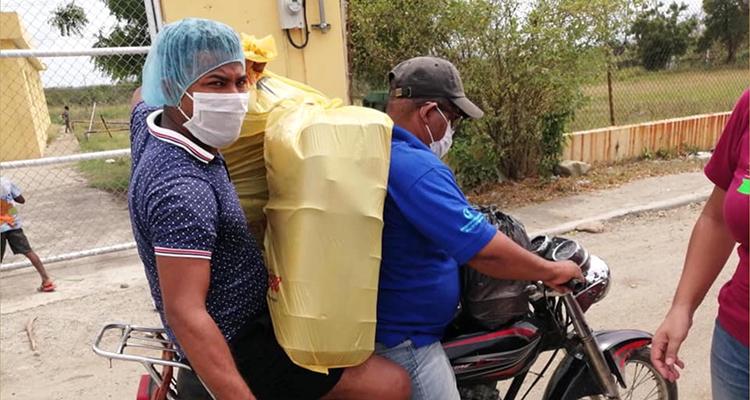 In the Dominican Republic, Nazarene churches have mounted a joint response to the need for food in vulnerable communities. Five churches are currently working through the Economic Kitchen project to serve hot food to hundreds of families in 11 communities.

Economic Kitchen is a government project that offers daily food deliveries to people with few resources and those at social risk. These individuals are currently in their homes in response to the Dominican ministry of health’s instructions to combat COVID-19. For that reason, the church volunteered to bring the food provided by the service to the family homes.

In March, the churches began to distribute the food. To date they have delivered some 680 hot lunches per day in the communities, “some of which are far away and difficult to access,” said Dhariana Balbuena, regional Nazarene Compassionate Ministries coordinator.

In some cases, the church members have had to travel by motorcycle in order to reach their destinations. The churches have also delivered seven rounds of non-perishable food supplies. So far, they have delivered 109 non-perishable packages.

“We have received help from different ministries in the church, fellow believers, business people, families, and community friends,” said Deuridis Pérez, Nazarene Missions International president at Alcarrizos Church of the Nazarene. “It is a great blessing for us as a church and as a team to see the joy in the children and the grateful expressions of the parents who know today they will not be hungry.”

Pérez said the team is thankful to see how God is using them to bless His people.

“We saw children insistently calling their parents saying, ‘Mommy, they brought us food,’” he said. “One child knocked on the door of a house and said, ‘Martin! Martin! They brought us food!’ We saw girls making tea from orange leaves in an improvised kitchen, and it was a blessing to be able to bring them food. One gentleman told us, ‘I was on the floor praying, asking the Lord to send us food because we are very hungry. Then you came, because the Lord sent you.’”

According to Pérez, the blessing was extended even further in some cases. One woman said she planned to take the food she received to her son in prison. Another girl said, “Give me some for my aunt. She is hungry too.”

While the team was distributing the food, they met a gentleman looking for something to eat in the trash can, and they were able to give him fresh food.

“There have been marvelous days in which we could help these families and see how they respect their local pastor because he gives priority to the children,” Pérez said.