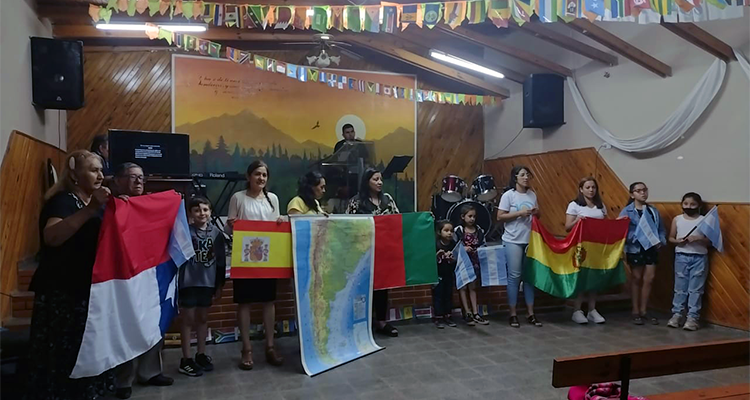 The annual Festival of Nations was held at the Iglesia del Nazareno El lugar para la familia in San Luis, Argentina, in late October. This event was held for the first time in 2015 in order to pray for nations that were going through warlike conflicts, natural disasters, and other adverse situations.

“The Festival of Nations has taken precedence year after year in our faith community and also among our immigrant neighbors,” said Pastor Gisela Estrella. “It is an invitation to pray for the nations and a point of connection with those who come to our city from different places.”

Every year, exhibits of each country are prepared. The country’s flag is displayed along with traditional clothes, music, and foods. Information is also provided about Christian ministry in the country and the missionaries who serve there if the Nazarene church has a presence in that country.

“The Lord commanded us to pray for the nations, for the workers, for the extension of His kingdom, not just those of our denomination,” said Romina Miño, national NMI coordinator. “We do not need the [Nazarene] church to be in the country to begin to pray in favor of those who are already reaching those places with the gospel.”

This year’s countries were Bolivia, Chile, Paraguay, Mexico, and Spain. Organizers also decided to add Afghanistan in light of the hostile environment Christians are facing in the country.

“We have learned to transform information into prayer,” Miño said. “That is why we cannot consume news of natural disasters and wars on a global level without crying out and acting. We read world events as precious opportunities to meet people’s needs.”

Four churches in the area participated in person or virtually, and three other churches that, despite the distances, said they were present virtually.