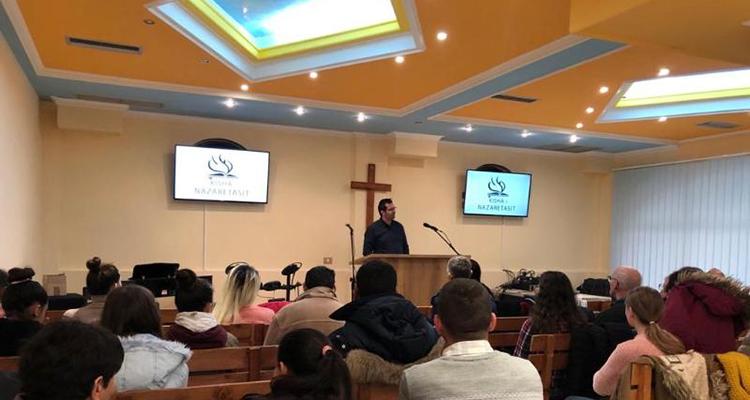 The Church of the Nazarene in Tirana, Albania, moved into a new worship space on 5 January 2020 after the building they owned for 25 years was damaged in a November earthquake. This past Sunday, 80 people gathered in the new sanctuary for worship.

According to Pastor Ergest Biti, finding sufficient meeting space in the church’s price range was a miracle. Many of the neighborhood businesses and buildings were damaged by the quake, so rental prices skyrocketed for the few remaining undamaged properties. Additionally, since the church owned its property, it did not have money budgeted to pay rent.

“After praying and looking around, I saw several places that could be a good fit for us,” Biti said.

He toured one of the properties with the landlord’s wife and believed it would perfectly suit the church’s needs. But the woman did not know what her husband wanted to charge for the space. At the next prayer meeting, the church prayed that if the landlord proposed a certain rent they had in mind, they would know it was from God.

Later, the landlord called Biti and suggested the exact price they had prayed about. The landlord even renovated the space to suit their needs before they moved in.

“We had to work hard for two days to set it up,” he said. “It was such a blessing: all the youth were cleaning, sitting there scrubbing tiles. The men were moving the benches from the old church to the new church. We moved the kitchen, including the stove and the fridge, from the old building to the new building. You could see all the church coming together.”

The church purchased their first space in 1995, holding services in the sanctuary that it converted from a former business. Their sanctuary was not large enough to accommodate the Nazarene Compassionate Ministries-funded child development center (CDC) that it operates for underprivileged neighborhood children.

In addition to more room for worship, the church’s new space also has two adjoining classrooms where they will have Bible studies, prayer meetings, and CDC operations.

An attached garden will expand their space outdoors, as Tirana enjoys several hundred sunny days a year. They have not previously enjoyed an outdoor area as part of their church property.

The church is not certain how long they will use this new space. Their former sanctuary was undamaged in the quake, but the rest of the building was compromised. As a result, the families renting apartments on upper floors had to move out while waiting for government inspectors to determine if the building can be repaired or if it should be entirely torn down and rebuilt.

More than a dozen families from the church have had to leave their earthquake-damaged homes and are living in temporary housing. People in the community were touched by the fact that although the church and some of its families themselves had suffered losses in the quake, they have been bringing meals, emergency supplies, blankets and other needed items to neighbors in need.

“We believe God will do better things for us,” Biti said.