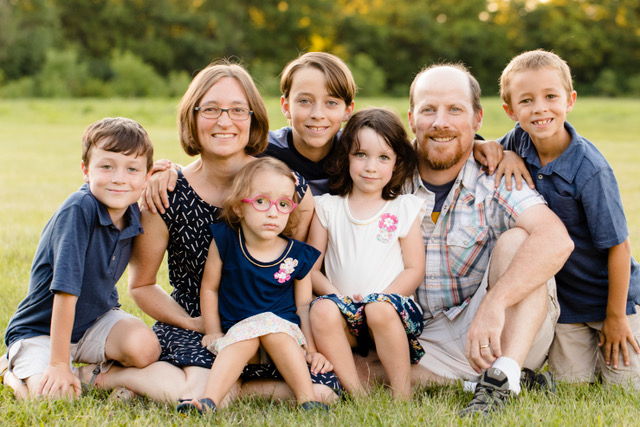 We are Scot, Jill, Aden, Wiley, Noah, Emma, and Audrey Riggins. We live in Manila, Philippines, where Scot serves as the Regional Finance Coordinator for the Asia-Pacific Region. Jill plays a supporting role as a stay-at-home mom for our five children, ministering primarily in the areas of discipleship, prayer, member care, and hospitality. Aden (age 12), Wiley (age 10), and Noah (age 8) attend an international Christian school. Emma (age 5) will start kindergarten in the fall of 2018, and Audrey (age 3) is thriving at home.

After serving as a volunteer missionary for 2 1/2 years on the Eurasia Region, Scot felt God's call to full-time missionary service. He returned to the US and earned his MBA, then went to Papua New Guinea in 2001 to work in finance and administration for the Melanesia and South Pacific Fields.

Jill felt God's call to be a missionary when she was eight years old; in 2002 she began to see the fulfillment of that call when she came to PNG as a volunteer missionary to teach the missionary kids. We met in PNG and were married in 2004. Aden, Wiley, and Noah were born at the Nazarene Hospital at Kudjip.

We served in PNG until 2010, then were called to serve the Africa Region in 2011. We lived in Johannesburg, South Africa for one term, where Scot worked in the finance department at the regional office. Our oldest daughter Emma was born in Johannesburg.  In 2013 we moved to Manila, Philippines to serve on the Asia-Pacific Region once again.  Audrey was born here in Manila in 2014.  Scot served as the Field Treasurer for the Philippines and Micronesia Fields, as well as the Australia-New Zealand Field until August 2014, when he was appointed Asia-Pacific Regional Finance Coordinator.  We are humbled and amazed by God's faithfulness and abundant blessings through our journey.