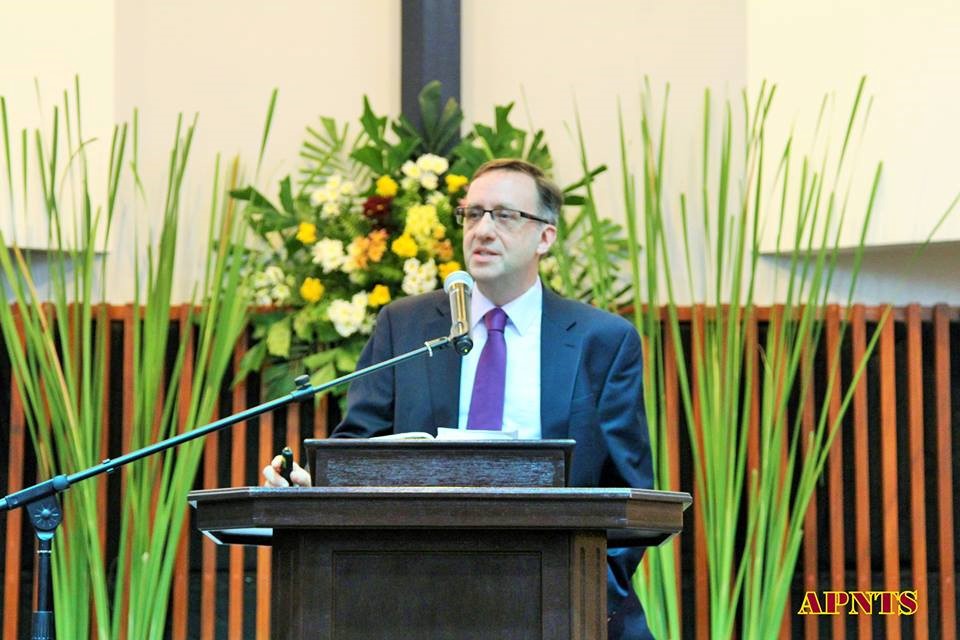 Floyd is a missionary of the Church of the Nazarene, serving at Asia-Pacific Nazarene Theological Seminary (APNTS) in the Philippines since the school began in 1983. He teaches the history of Christianity, including Naza-rene history, and various other subjects.

APNTS is the Nazarene church’s regional graduate school. There have been 600 graduates of APNTS. APNTS currently enrolls students from such countries as China, India, Japan, Lebanon, Malaysia, Myanmar, Nigeria, Pakistan, Papua New Guinea, Peru, Singapore, the United Kingdom, the United States, Vietnam, and Zambia as well as the Philippines. Amazingly, during the pandemic, when all of our classes were held via Zoom, the enrollment of APNTS increased! Former students, scattered around the world, serve as pastors, Christian educators, Bible college administrators, missionaries, even district superintendents.

APNTS, located just outside Metro Manila, in Taytay, Rizal, is a beautiful oasis of peace amid a lot of traffic. APNTS has a lively ministry to its surrounding community, which is made up of very poor people. Floyd shares about that outreach when he speaks in churches.

APNTS has extension programs in several places in Asia and the Pacific, and Floyd has had the awesome experience of teaching pastors and future pastors in Korea, Taiwan, Papua New Guinea, Indonesia, Myanmar, Fiji, Australia, and places that he cannot mention, where classes were held in secret.

Floyd is also a writer. He co-authored and edited Our Watchword and Song, the Church of the Nazarene’s centennial history. Floyd also wrote Holiness Abroad: Nazarene Missions in Asia. His little book Expressing a Nazarene Identity is available on-line. He also wrote Examining Our Christian Heritage I-II, the church history modules for the Nazarene Course of Study used in USA-Canada and other places.

Floyd grew up in Maryland, near Washington, DC. He attended Eastern Nazarene College and Nazarene Theological Seminary. Though he always thought he would pastor in the USA, he went straight for his PhD in history to Johns Hopkins University (where he studied under a Nazarene historian, Timothy L. Smith), and then directly to the Philippines. After two years in the Philippines, he felt called to be a missionary. After four years at APNTS, he was ordained on the Mid-Atlantic District. For six years, he pastored churches in the Philippines. He was academic dean of APNTS for 25 years, and president for five years. Currently he is serving as Interim Academic Dean.

Floyd has several honors, including perfect attendance in junior and senior high school (six years!), and being elected the “Most Quiet Freshman” at ENC. He tries to play table tennis and tennis with students, jogs around campus, and, once or twice a week, enjoys visiting one of the half dozen or so nearby Starbucks.