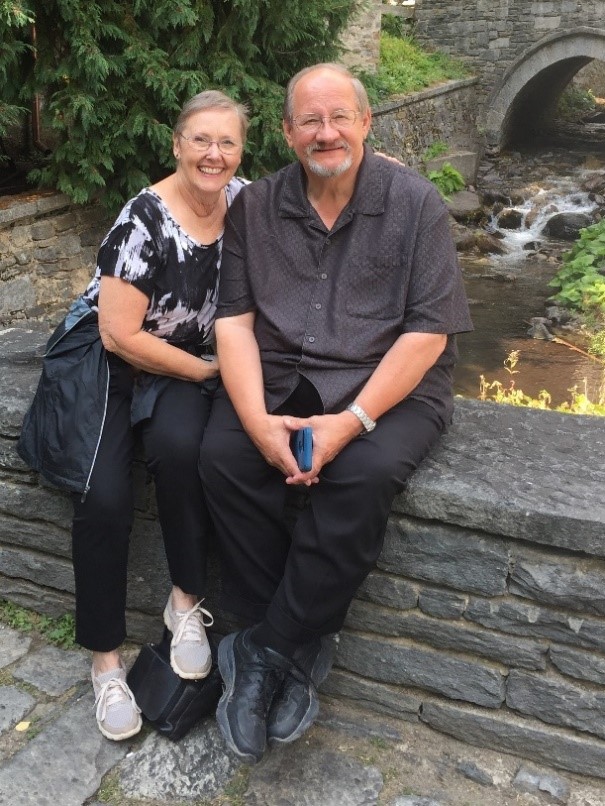 What is God asking you to do?

Bill & Theresa are sponsored missionaries on the Central Europe Field on the Eurasia Region and have their own unique journey to Nazarene missionary service.

Theresa was born in Portland, Oregon and grew up in the Church of the Nazarene. No matter where her Air Force family was stationed, they found a Church of the Nazarene to be involved in. She came to know the Lord at 9 years old in a revival service. She always had a love for missions and fully committed her life to God’s plan as a teenager at International Institute (now Nazarene Youth Conference). She graduated from MidAmerica Nazarene University with a degree in History & Secondary Education. It was there she met her husband, Bill. They have been married for over forty-five years.

Bill grew up in a dysfunctional home with atheistic, abusive, alcoholic parents. From age 13, he lived on his own, only staying in school because of his love of sports. He found the Lord the week before his final year of high school. That moment at the altar in the Nazarene Church in Caruthersville, MO changed the course of his life forever! Bill graduated from MidAmerica Nazarene University with a degree in Religion and then served on staff in Woodward, Oklahoma in Youth & Children’s Ministries. Bill then attended Nazarene Theological Seminary where he earned his Master of Religious Education and then went on to church plant and pastor. Years later, while pastoring in Oregon, Bill earned his Doctor of Ministry degree from Nazarene Theological Seminary.

Bill and Theresa spent five years planting the church in Junction City, Oregon. They went on to pastor First Church of the Nazarene in Phoenix, Arizona, and then returned to Oregon where they pastored the Molalla and Newport Churches of the Nazarene for over twenty years. They were pastoring Gateway Church of the Nazarene, Murrieta, California on the Southern California District when they began to prepare to volunteer for three months on the mission field for Bill’s sabbatical. After 37+ years of pastoral ministry, during the preparation process, God clearly showed them that He had a new calling for their lives through Nazarene Global Missions.

At the end of their 2018 Home Assignment, learning the Sri Lankan government would not renew their visas, they were assigned to the Central Europe Field, to serve in Bulgaria. Their current assignment includes mentoring pastors & leaders, district development, teaching for European Nazarene College and administering Bulgaria’s learning centers. Bill was appointed District Superintendent of the Bulgaria District at the 2019 assembly.

The Grigory’s have two daughters who are graduates of Northwest Nazarene University. Shannon is married to Rev. Josh Herndon and they serve as Nazarene missionaries on the Eurasia region, along with their children, Karis & Kaeden. They have served in Spain, Greece and are currently awaiting a new assignment in Italy. Megan is married to USMC Major Derick Staffenson, stationed at USMC Air Station New River, North Carolina with their children, Max, Luke & Emery.